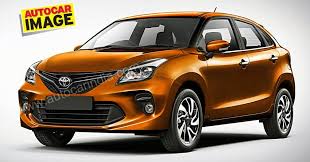 Toyota and Suzuki partnered to give out their first product TOYOTA GLANZA. The brand’s first ever deluxe hatchback is already in the market across Indian subcontinent. Apparently, the car shares so many similarities with MARUTI BALENO, that the former is being called a “rebadged” version of the latter. The two siblings are identical in terms of both interiors and exteriors, and moreover are manufactured on the same assembly line! This cross-badged product of Toyota and Suzuki have thus attracted a lot of talk. Will the first product off the alliance be in cross roads with MARUTI BALENO? Or will it be a better buy? Let’s look at it in detail.

The teasers released by the brand confirmed the vehicle’s similarities with MARUTI BALENO. The cars are identical in terms of Headlights, LEDs, paint shades, alloy wheels, powertrains and even the blue-black themed interiors. Few changes have been made to the bumper and the grille, but otherwise the silhouette and dimensions are more or less identical. The vehicle is finished with marque Suzuki’s logo.

The car sports an ignition push-start button feature. The dash comes in an all black theme and in the centre, a similar 7-inch touchscreen infotainment system is embodied. The steering wheel looks the same as that of Baleno only with Toyota’s badge at the center. It is embodied with controls. The rev counter and speedometer are separated with a small information display just like MARUTI BALENO and comes with blue backlit cluster. The console at the center features Smart playcast with Android and Apple connectivity. Reportedly, TOYOTA GLANZA is the first in India to sport Android Auto and Apple CarPlay. That said, TOYOTA GLANZA is awfully similar to its sibling.

TOYOTA GLANZA does not give any diesel engine options. The car gets its engines from Fiat and comes in two variants. The V variant produces 83bhp and 113Nm. The K12M motor that is available with a 5-speed manual or CVT. The G variant comes with K12N DualJet mild hybrid mill which gives 89bhp and 113Nm. It is available only with a 5-speed manual available in only a single G MT variant, while the K12M engine is offered in G CVT, V MT and V CVT. The V trim offers 21.01 kmpl of mileage, 23.87 kmpl for the G MT (Mild-Hybrid) trim and 19.56 kmpl for the CVT. These are the same for corresponding variants of MARUTI BALENO.

Here’s a list of variants with the respective prices:

Well, while in all the aspects, TOYOTA GLANZA is similar to MARUTI BALENO, it does stand out in terms of the price difference between the G mild-hybrid variant and respective MARUTI BALENO. There is a substantial price drop of INR 65,000 in favor of former.  Another advantage that Toyota’s product offers the consumers is in terms of warranty. It bestows a warranty period of 3 years over 100,000kms. On the other hand, Maruti’s warranty is much lower at 2 years/ 40,000km.

In terms of fuel efficiency and price, Toyota Glanza stands out as a better option.

Why an Extended Car Warranty is Important in 2022

Why is TVS becoming the first choice of many youngsters?

Glass in interiors: peculiarities and safety of constructions