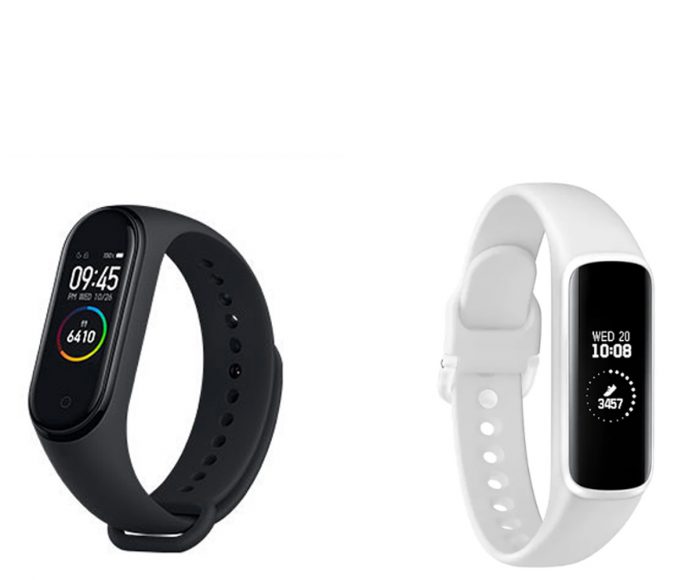 With a stronghold on the cellphone market, SAMSUNG distracted itself from the domain to wearable devices this year. With the company’s not so successful previous attempts in the sector, the product’s success were not sure shot and hence, was anticipated by both, users and launchers. It was a touch-and-go whether SAMSUNG WEARABLE DEVICES would stand out in the market or not but surprisingly, the devices received an impressive positive response from the users. SAMSUNG launched three wearables to go with Galaxy S10. They are SAMSUNG GALAXY FIT E, SAMSUNG GALAXY FIT and SAMSUNG GALAXY WATCH ACTIVE. Read the complete review of SAMSUNG GALAXY WATCH ACTIVE here.

The three new SAMSUNG siblings go well with the overall theme of the brand and fit coherently in the atmosphere. SAMSUNG GALAXY FIT E will go on sale from July 5 and is priced at Rs. 2,590. The new fitness wearable is company’s cheapest fitness band launched till date. The fitness band has caught people’s attention because of its affordability, its marque and top-in-line features.

In the range of fitness bands, there are many brands in the market topping off each other. One of these brands, Xiaomi has been consistently establishing its territory. The brand launched XIAOMI MI BAND 3 priced at Rs. 1,999 only, which received popularity in the market. XIAOMI MI BAND 4 has been launched in China recently and is expected to be launched in India soon. The price of the band ranges from Rs. 1700 to Rs. 2300 in China.

XIAOMI MI BAND 4 sports quite a lot of features and had a miraculous sale in first 8 days of its release in China. India anticipates the launch of XIAOMI MI BAND 4 which will give a tough competition to SAMSUNG GALAXY FIT E. Let’s draw a comparison of their features to predict which one will top the list.

SAMSUNG GALAXY FIT E sports a 0.74-inch monochrome PMOLED display. FIT E operates FreeRTOS and comes with 128kB RAM and runs on 70mAh battery. Connectivity options include Bluetooth v5.0. It works with the help of sensors including accelerometer and heart rate monitor. SAMSUNG GALAXY FIT E can also receive calls and messages alert and can also function to remind the users in case of alarms or calendar event. The wearable is available in three colors viz. Black, white and yellow.

The band is compatible with all Android phones sporting more than 1.5GB RAM and should come with at least Android 5 Software. For Apple devices, the watch will operate and connect to iPhone 5 or above models with iOS 9 or above.

XIAOMI MI BAND 4 sports a 0.95 inch AMOLED display. For protection purposes, the dial of the band is equipped with 2.5D scratch resistant glass. The band packs 512KB memory with additional 16MB flash memory and 135mAh of battery and boasts 15-20 days of life on a single charge. The band weighs 22.2g only. MI 4 is water resistant up to 50 meters and also hosts sensors to track swim strokes.

Other then the features of a standard activity tracker, the band allows you to select a range of activities to be monitored together on-the-move on the Auto Workout Tracking mode. (By default, it monitors 3 activities). A wide array of upto 90 workouts are available to choose from. It also has a heart rate monitor that can keep track of your heart rate at all times and even notifies you in case your heart rate goes above the admissible level. The band is capable of accounting your sleep patterns as well. In association of SAMSUNG health app, the band can do much more.

XIAOMI debuts Xiao AI voice assistant with XIAOMI MI BAND 4. The voice recognition makes all your endeavors easy and one command away. Additionally, the band also has 77 colorful watch faces. In China, the band was launched in 2 variants viz. NFC and non-NFC.

With an AMOLED display and Xiao AI voice assistant, XIAOMI MI BAND 4 is in lead clearly. But it all gets narrowed down to whether these features come in the Indian variant of the fitness band. SAMSUNG GALAXY FIT E is currently a good buy in the range. Read complete review of SAMSUNG GALAXY FIT and SAMSUNG GALAXY WATCH ACTIVE in my previous blog.

Why does gamestop have great popularity?