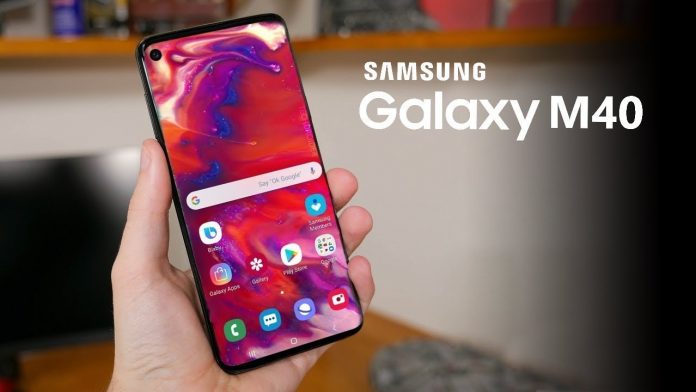 Samsung is all set to bring out the terrific “screen sound” feature with its new handset Samsung galaxy m40. With its triple camera setup on the rear and other enticing features, galaxy m40 is here to rule the market. Read more on galaxy m40 specifications, galaxy m40 camera, price and other details.

Samsung, the south korean smartphone giant is ready to release its brand new variant to the ‘M series’. Galaxy m40 launch date in India has been set. The phone will hit the markets on June 11. Samsung has designed and equipped the latest smartphone with all the top in line features. With its terrific “screen sound” feature and infinite ‘o’ display, we can’t wait to get our hands on it. Let’s take a quick sneak peek at galaxy m40 specifications:

The handset boasts of ‘o’ infinite display with a screen size of 6.3 inches, pixel density of 409 PI and 2340*1080 pixels resolution. Like the previous variant of the M series, galaxy m40 sports a Super AMOLED, bezel-less, punch-hole display with an aspect ratio of 19.5:9. Galaxy m40 will try the ’screen sound’ technology which means it won’t have an audio earpiece and the vibrations and sounds will come directly off the screen.

Samsung has been teasing the release of its new smartphone for quite some time now. The handset has now been listed on Samsung and Amazon’s e-commerce website. Additionally, a video teaser was also posted on the brand’s social media pages. The video boasts of Infinity ‘o’ display. Galaxy m40 will launch through all online and offline platforms in India on 11th June 2019. Though for now only a single variant with 6GB RAM and 128GB internal storage is announced, other variants are expected to be launched soon.

Galaxy m40 is expected to cost round INR 19,900 only. In a recent interview, Asim Warsi,Senior Vice President and head of Samsung’s mobile business in India told Gadgets 360.” M40 will come around the give or take Rs 20,000 price point – somewhere there.”

Galaxy m40 is a handsomely featured smartphone with powerful configuration, up to par battery backup, outstanding camera and ample storage. With all the software and hardware specifications along with new, enticing features as ‘screen sound’ and infinite ‘o’ display, the handset seems a promising one. In my opinion, at this price tag, the smartphone is a good buy.

How To Maintain Your AC & Be Ready For The Summer

What are The Significant Benefits Of Using Wireless Gaming Headsets?

Garmin Fenix 6x vs 6 vs 6s – Which Smartwatch is Better?

6 Must Have Features To Look For in Folding Bikes

Facebook’s iOS app might secretly use your phone’s Camera as you scroll your feed.

Some Best Top Anime TV Shows in The History

Why Diversifying Your Business is Increasingly Important: What We Can Learn...